Are Your Shopping Choices Hampering Your Ability to get Credit Line Increases?

If anyone wonders why I think credit is a game -- an important game, mind you -- look no further than the things credit-card companies do. Would you be surprised to learn that your first purchase (with your brand new credit card) could impact the way your credit-card company does business with you in the future? What if I told you that because you shop at XYZ, you could be denied a credit-line increase? Outside of my credit-geek circle (you know who you guys are), people are astonished by the importance that card companies place on customer purchases.

I first learned about first-purchase models about a year ago. An online friend of mine, who hangs out on CreditBoards, posted a message about what not to buy when it comes to first purchases. I was intrigued by his short list.

Turns out that a cash advance, as a first transaction, is a big no-no. That's not surprising, by the way. Cash advances of any sort (first purchase or not) raise red flags with card companies. If you're tapping cash at 24%, a card company probably has good reason to wonder what's going on. Number two on his list was beer and spirits (from the store). Online porn came in at number three. I was somewhat surprised by numbers four and five. An infomercial product, at number four, is not a good first purchase. Ditto television-shopping-network purchases. Gasoline, discount stores (think WalMart), and travel purchases are seen as neutral.

When I explain this first-purchase modeling to people, I invariably get reactions like this: "How unfair is that!" Or "Why should my chances for a credit line increase in the future be dictated by my first purchase?" Others simply say screw it. If card companies, these people say, want to deny credit-line increases, or severely restrict them, based on what I am buying, oh, well. These people aren't playing the game.

I take a different approach. Since I know card companies engage in this first-purchase modeling, I make first purchases at places that should enhance my chances for a credit-line increase. I may not like the game, but if this is what credit-card companies are doing, then, hey, I'll play the game. With the exception of my American Express card (which we'll discuss in a moment), my first purchase is always done at Starbucks. I buy a hot cocoa for a whopping $2. 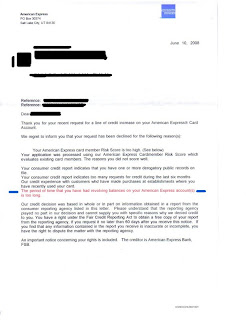 American Express cited four reasons for the decline. We're most interested in reason number three: "Our credit experience with customers who have made purchases at establishments where you have recently used your card." Here's what American Express is saying: Some of our customers shop at XYZ. These customers, as a group, tend to be more risky (based on our number crunching). Because you shop at XYZ, we think that you could be more risky. Hence, you're not getting an increase.

You may not like the game, but American Express is playing it. Your purchases are being tracked by American Express (and I imagine other credit-card companies as well). If you're shopping at the wrong place, your request for a higher limit could get denied. It certainly seems unfair. Indeed, it is unfair. But that's the game.

Now that I know what American Express is up to, I'm playing the game as well. I'm only going to use the card at places where I think it might be safe. There can be little doubt that my card won't see as many purchases as American Express would like, but they're partially to blame. If they didn't ding me for shopping at the wrong place, I wouldn't worry about my shopping habits. And if you're wondering, my first purchase occurred at a high-end retail store on the west coast.

In the end, here's the deal. Most consumers don't have a clue about this predictive-analytics stuff. It's fairly esoteric to say the least. This blog entry should be used at a starting point. I imagine that you could Google your way to a ton of information on this topic.

In the meantime, it's enough to know that American Express, and others, are using your purchases to determine whether you're getting credit-line increases now or in the future.

To learn more about predictive analytics:

Get Your Free Credit Report Every 12 Months At AnnualCreditReport.com