Citibank to Students: Use Your Card or We Will Shut You Down

I haven't heard a lot about student cards getting shut down for inactivity, so let this story serve as a reminder: students, use your credit cards. Do not let them go inactive. That's the takeaway from two letters that my friend's girlfriend received over the weekend.

Turns out that Citibank isn't just looking to close down general cards, it is shutting down inactive student credit cards as well. Because my friend's girlfriend had not used the cards for some time, Citibank closed two of her student cards. I imagine that most students don't have to worry about this -- because so many college students keep balances -- but if you are a pay-in-full kind of student, and you are not using your card on a regular basis, you should consider using the card sooner rather than later.

Here is the Citibank letter (my friend's girlfriend actually received two of these letters): 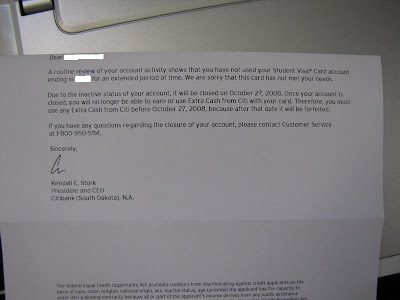 In addition to the card being closed, this customer will also forfeit any Extra Cash rewards that have accumulated on the card over the years. So, be sure to use the rewards before the card is officially closed.

Citibank has been stepping up its account closures of late (you saw what happened to my Citi Flex account. If you didn't, read about it here (link)). I've been hearing, behind the scenes, that Citibank is reviewing all inactive accounts -- and then determining whether to shut the accounts down. Indeed, after nearly 15 months of not using my Home Depot card, I recently made a purchase on the card. Thankfully the card still worked. That Home Depot card (underwritten by Citibank) is almost five years old. I like the age on the account.

While the girlfriend's account closures are probably justified (it had been more than a year since she last used them), there are likely other students out there who are on the bubble. If you haven't used the card for six months, you could get shut down at any time. If you're in that boat, I recommend that you use the card as soon as you can. You simply want to get out of the "inactive pile" that Citibank is digging through. Plus, and this cannot be overstated, it would be a lot better to keep your current cards than to reapply for a new one (not exactly the easiest environment to get new cards).

I've written about this stuff in the past. Used to be that you could let cards sit idle for a lot longer than six months. No more. Card companies are actively looking to shut down inactive credit cards.

I'm starting to think that three months is too long to go without putting a purchase on a credit card. Let this story serve as a reminder that an inactive card is a rich target for a credit card company looking to close an account.

Use them or lose them, folks.

Is it true that banks actually need your credit line as available funds on hand?

Used to be that they would send you a letter saying "we've missed you so here is a nice CLI" to get you to use their cards. Times are changing, and more stories to tell my kids one day :)

Josh, rephrase your question. Not sure what you're asking.

In particular, read the part about "Cash Flows for Credit Card Lending."

There were 3 banking CEOs I personally disliked when I worked in NYC. #1 was John Reed of Citibank. He was a real nut case. Left his wife of 20+ yrs for the stewardess on the bank's private jet. Threatened to move Citibank's corporate HQ to Mexico. He was a japanophile. You had to take your shoes off when you enteredhis office. Everyone who worked on the Street had a John Reed story.

#2 Sanford Weil of Shearson-Lehman American Express (that dates me!) Just a 'not nice' guy.

#3 the 'dark horse' from NC. Had a little bank named North Carolina National Bank or NCNB. This became Nationsbank...now BofA. The man was Hugh McColl. An ex-Marine who ran his bank as if it were war games. Admittedly a genius....but did not give off warm fuzzies.

CC I refused to have in my wallet...Citi, AMEX and BofA. Maybe I should write a book! "How to pick your next bank."

CM, good stuff as usual--the FDIC link was also definitely worth a read, particularly the part about a ratio of outstanding limits to assets is being computed.

I assumed card companies were free to overcommit credit limits without bound since the money isn't lent until the customer actually makes a charge and the companies have (as recently demonstrated) the ability to contract those limits at will.

To me, a $xx,000 limit doesn't mean I can really borrow $xx,000--my assumption is that when the card companies sees me ramping up to 1/2 or 1/4 of $xx,000 that they would probably react by chopping $xx,000 to some fraction of its former self or even chasing the balance.
I treat credit limits as marketing indices--as numbers intended to influence me to use given cards for more purchases and to perhaps carry small relative to those limits, profitable, and not-too-risky balances, rather than to tell how much the companies actually are willing to lend me.

Manatees, thanks for the anecdotes. Can't say I'm too surprised that those who ascend to that kind of power are at least borderline if not outright psychopaths.

SNL, no idea who that person is. I do not post at Fat Wallet.

Someone clearly trying to pretend as though they are me. Plus, I do not write like that particular clown.

My guesses as to the two most likely scenarious are that someone doesn't like your getting eyeballs on the information you're putting out or there's a dude in his parents' basement somewhere who needs something constructive to do.

I just created a user name at FW. I am CreditMattersBlog. I must have pissed someone off. LOL. Must be some low-life user that I hammered over at CB.

DM, glad that you enjoyed the FDIC link. I found it extremely helpful myself.

And regarding the loser is his basement, it's very sad.

Wow...how sad! Now someone over there is claiming YOU wrote the original post to generate traffic...obviously they have never been here - you don't need help generating traffic!

And the original writing style is completely wrong.

On a more constructive note - my sis's Citi card just got shut down for no use. She was pretty ticked off and called me to yell about it. Any ideas if they will reopen?

You can have her call to reopen. Not sure they will do it. But it's worth a try. They give you a phone number to plead your case. I'd call.

Regarding the moron pretending to be me, I can only laugh. My attorney is looking into my options here. It's one thing to criticize me; it's another thing to impersonate me.

Right? I mean we can all take (or should be able to) criticism but he went too far. That is the problem with the internet - everyone thinks they are anonymous when, in fact, no one ever truly is.

Thanks for the advice - I will have her give them a call. Funny thing is - she actually uses the card!

Lion, that sucks. Definitely have her call. She might not be using the card enough. But at least she needs to hear that from Citibank. And, if that turns out to be the case, please send her my way. I would write a story about that.

And no one is anonymous, Lion. You got that right. We'll see if the cyber stalker stops.

Lion, the sooner the better. Was there a date in her letter?

FW removed the original post over there. That's good enough for me. Just didn't want that garbage sitting there. Enough of guys were wondering what the heck was going on to warrant me to get it removed. Normally I would just leave something like that.

At Checkout, Be Sure To Use This Code For A 20% Discount Off Your FICO Scores: CPPSAVINGS

Get Your Free Credit Report Every 12 Months At AnnualCreditReport.com