After years of being opted out, I opted back in toward the end of 2008. I can tell you that I haven’t received much mail at all. I figured with FICO scores of nearly 800, I would be inundated with offers. No dice. If anything, I have seen a drop off in mail. Go figure. Gary Silbar wishes he was that lucky. His family received some 445 card offers from November 2007 through October 2008, according to the Chicago Tribune. For good measure, card issuers sent offers to Silbar’s children, ages 8 and 11, as well. From the story:When the economy soured halfway through the year, he expected the barrage of direct mail to slow to a drizzle. It did no such thing.The reason, experts say, is that Silbar and his wife, Karen, have good credit histories. He runs a public relations firm, Gary Silbar Communications, from his home and banks with Chase. That company, alone, sent 110 solicitations.Silbar wondered if his family was an anomaly and why banks continued to spend a ‘boatload’ of money on people like himself who don’t respond.I would love to know how many offers Silbar received after October 2008. My guess is that the offers dropped off substantially. Read the rest of the story here link.

Citibank cardholders are being offered a nice deal right now. If they sign up for a Citibank checking account, and fund it with $1,000 by January 31, 2009, Citibank will give them $100. If that’s Citibank’s way of saying thank you for bailing out its parent company, then I’ll take it. You’re welcome, Citi. Of course, if you’re not a Citibank cardholder, you can’t participate in this deal. But rest assured that your taxpayer dollars are going to a great cause. Is this where I put in my sarcasm indicator? Here is a picture from Citibank’s Web site click picture to enlarge: 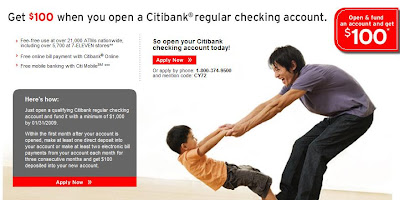 I give Citibank a lot of grief around here, so I thought it only fair to highlight Citibank’s benevolent side as well.Citibank, if you’re crawling around my site today, I thank you. And, though I cannot speak for all of them, I would suspect that taxpayers thank you, too. Viva la Citibank.

My best friend once gave me this advice: you can’t think clearly if your workspace isn’t clean. The same advice is applicable to managing your credit cards as well. Keeping track of due dates, statement dates, annual percentage rates, and utilization ratios, for example, requires a management tool. Without one, I’d argue that you’re no different than the kid who can’t think clearly because his desk is cluttered with a bunch of garbage. Because I have a host of credit cards, with different pay dates, it’s imperative that I track my cards closely. To do that, I use an Excel spreadsheet. The spreadsheet should track pay dates, annual percentage rates, utilization ratios, credit limits, credit balances, etc. I use a spreadsheet that was created by a member of creditboards.com. It’s the best spreadsheet I’ve ever seen. And I use it religiously.Given how important it is to never be late — especially in the current credit environment — having a spreadsheet that tracks your financial life is a no brainer. Let’s face it, without a spreadsheet that keeps track of our various credit cards, it’s easy to miss a payment. It’s just the nature of the beast and it’s the nature of having a bunch of cards without also having a plan to keep track of them. None of us are infallible. Using a spreadsheet, however, minimizes the risk for us. It ensures that we won’t have an excuse for ever being late.Now that I have sold you on the idea of tracking your credit card portfolio, head over to creditboards.com to download a copy of the spreadsheet I use. It’s free and it’s not a commercial product. I’ll let Joe — the creator of the spreadsheet — know that all of my readers thank him for the new tool. Without further ado, then, the spreadsheet can be found here.